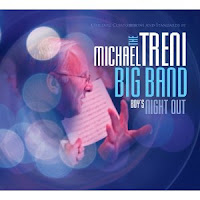 There is mainstream modern and then there is mainstream traditional. The Michael Treni Big Band is the latter, at least on their latest CD Boy's Night Out (Bell Production). This band has affinities with the original Thad Jones/Mel Lewis Vanguard band, late Woody, that sort of thing.

But they are good at it: tight ensemble, swinging rhythm section, nice soloists, good arrangements. Michael Treni is on trombone. I see Jerry Bergonzi is in there on saxes (and I hear him too). The rest of the names don't ring a bell with me, but they sound well together.

It's a nice romp through some perennials, "Something's Coming" from West Side Story, "Lullaby of Birdland," Strayhorn's "U.M.M.G.", "Here's That Rainy Day," and others less familiar. It all sounds very good. You like this sort of thing, you will most definitely like this band!

Posted by Grego Applegate Edwards at 4:45 AM