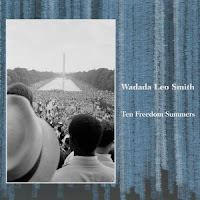 When a musical giant produces a masterpiece, one is at first speechless. That was my first reaction to Wadada Leo Smith's moving and monumental Ten Freedom Summers (Cuneiform Rune 350-353), a four-CD set of 19 interrelated compositions portraying the bitter, courageous and ultimately breakthrough struggle for African-American freedom, the Civil Rights movement in the period of 1954-1964.

I was speechless. Truly. Speechless because the music has such significance, on any level you could experience.

It is a product of 34 years of compositional labor, compositional inspiration, though much of the work was completed in the past three years. It is a pinnacle of achievement in a remarkable creative career and a summing up of all that has been and is Wadada the master creator. But most of all it is a music statement of high importance.

The musicians involved in the project are of course all-important to its success. And they come through. Aside from Wadada on trumpet, there is his Golden Quintet--Wadada plus Anthony Davis on piano, John Lindberg on bass, and drummers Susie Ibarra and Pheeroan akLaff. Their performance is phenomenal. Then there is the modern classical group Southwest Chamber Music under the direction of Jeff von der Schmidt. They, too, are in a fine mettle. They excel in their readings and add the important third dimension to this totalizing work. (The three being trumpet, quintet and chamber group.)

The music in sequence showcases Wadada's by now iconic trumpet mastery, the improvisational and compositional realizations by the quintet and the contemporary music as played by the chamber orchestra. The three forces work together as equal sonic partners for music that does not flag nor does it seem anything but an inevitable, natural musical flow from event to event. And each event is necessary, wonderfully evocative and profoundly moving.

If nothing else this series of works integrates the composed and the improvised in ways where it makes no sense to parcel out the music categorically. The music is one and it makes one cohesive statement. There is stylistic integration of the forms that Wadada hears, as a composer, as a free improviser, and someone who has worked his way out of later Miles to come back to himself even more strongly. He has distilled the essence of his music to make an extended mega-work that despite its length is never tentative or indulgent, but always right on point musically.

I will leave it to the listener to discover the interrelations between the music and the events in the Civil Rights struggle that it depicts, commemorates, mourns and celebrates accordingly. Those ten years turned out to be momentous and as important to the rights of all African-Americans as it is to the people of the United States at large. The fight of course did not end in 1964. It is still taking place. All the more important then to look back on that critical period and remember through music.

After my period of speechlessness and several more listens to the entire cycle I regained my voice. This is music of the sort that comes along only a few times in any generation. It is a landmark achievement. The music breathes life into our times by defining it in relation to the critical historic past, and it does so in a way that future generations, I believe, will associate with our era. We are witnesses and participants in history. A history of the Civil Rights Movement, yes, but also in music history. Ten Freedom Summers will be one of the defining works of our era. I do believe that.

Posted by Grego Applegate Edwards at 4:50 AM