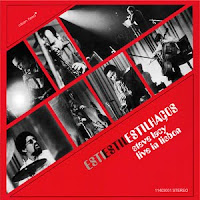 The Steve Lacy outfit that included Steve Pots on alto, Irene Aebi on cello and vocals, Kent Carter on bass and various drummers, was one of Lacy's most productive and long-lived. They recorded many albums, gaining in the process followers and critical acclaim. I do not recall many live albums however. That does not mean there weren't any.

Clean Feed has recently released a set of the band live in Lisbon from February 1972, Estilhuacos (Clean Feed 247). For this recording Noel McGhie is on drums, Irene does not sing, and the band runs through some of their more familiar pieces from the era along with a few that are less so.

The recording is not perfect but has general clarity, if occasional slight distortion at the peaks. There is the spontaneous freedom situated around the pieces as you would expect. Potts sounds his extroverted self, Aebi adds her color, Carter thunders and plummets, McGhie is loose and flexible and Maestro Lacy is perennially himself.

It may not be a "drop everything and go get this" sort of release, but it offers the band in a slice of time. This is how they sounded on that day. It's different enough that it adds another take on the collective spirit of the band. It may not be THE single Lacy album to get if you don't have any. But if you are a fan of Lacy in this period you will no doubt appreciate it.

Posted by Grego Applegate Edwards at 4:11 AM