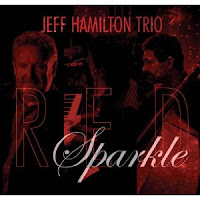 Jeff Hamilton has for years been one of the premier drummers working in old-guard mainstream. In many ways he is to the drums what Scott Hamilton is to the tenor. They both work in styles that predate contemporary mainstream. And they do it well.

For Red Sparkle (Capri 74114-2) Jeff puts together a hard swinging trio with Tamir Hendelman, piano, and Christoph Luty, bass. The program is grits and groovy originals and standards done in the way that they might do it in a club. I felt like I should be drinking a beer as I listened.

Tamir sounds like everybody and nobody at once with his hard-hitting block soulfulness. You hear a little of everything from Milt Buckner to Red Garland, Oscar Peterson to Horace Silver, Ahmad Jamal to Ray Bryant. But no it's not a lot of bop lining that he's up to . . . more like a mini-big-band on the 88s. Christoph articulates his part in the three way arrangements well and gives the music the fundamental grounding it needs. Jeff shows his taste, drive and finessing of the traps.

It may not be breaking new ground, but Red Sparkle masters the older paths with enough push and liveliness that it does not sound routine in the least. It's a good meal for the ears.

Posted by Grego Applegate Edwards at 5:06 AM