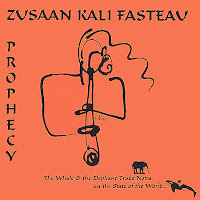 Kali. Z. Fasteau has staying power. In a long and productive career as an avant improviser stemming back from her association with Donald Rafael Garrett through to today, she has remained true to her vision while continuing to expand her multi-instrumental versatility and sound color palette.

As part of our periodic explorations of her music (thanks to Kali sending me a batch of her disks) we look today to an early release on the Flying Note label (9003), her 1993 Prophecy: The Whale and the Elephant Trade Notes on the State of the World. In some ways it is among her most versatile, covering both the world-tribal and free improvisation zones with a fullness of instrumentation and inspiration of a high order.

It's music of a cosmic dimension, of course. You expect that of Ms. Fasteau's output and you get it. She's consistently extended and expanded the open spirituality and eastward-leaning world village expression pioneered by Trane, Pharoah and others.

I won't go into details on the musical content in this post, except to say that is Kali's music at its collective best. If you want to pick one of hers to start checking her out, this is probably the one to get.

Posted by Grego Applegate Edwards at 5:10 AM