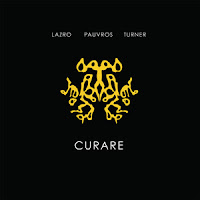 The outside edges of improvisation and jazz continue to exist and thrive all over the world. The message of Ayler, Trane, Ornette and Cecil has spread and been adapted over the years into subsets of common vocabulary which could be divided into a number of schools. I wont set about doing that systematically this morning because in part my time is limited, but I will say that the recent release Curare (No Business 38) loosely and effectively makes music that comes out of the sound-as-sound quasi-new music camp.

It's a trio of Daunik Lazro on baritone and alto saxes, Jean-Francois Pauvros on electric guitar, and Roger Turner on drums & percussion. They wind their way through a series of four improvisations notable for the sound textures and colors evoked. All three rely on conventional and unconventional sound production techniques, quite inventively so.

The music that results is a panorama of interactive acoustic sound layering. They work within a pattern of sound and silence less pointilistic than more-or-less continuous.

I remember years ago a review in Downbeat gave the ESP release of the European Free Music 1 & 2 album the rating of four stars/one star. Now that of course was the reviewer's equivalent of throwing up his hands, saying, "how can you evaluate this avant stuff?" Well of course you can and must. Curare succeeds in what it sets out to do. It follows an aesthetic through in ways that show a feel for sounds and the idea that variety and interest, interaction and simultaneous sound composition can be done well or less-so. Curare does it well. The fact that some people may not understand the music or may even come to hate it is not our business. The problem is theirs.

So set sail with this one to one of the avant colonies newly settled. You'll feel at home if you allow yourself an open stance towards it all.

Posted by Grego Applegate Edwards at 4:58 AM