Clare Fischer, After the Rain 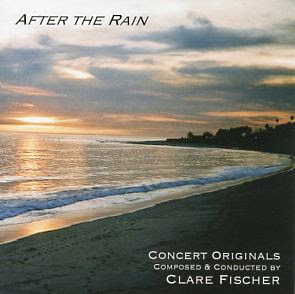 Clare Fischer (1928-2012) was a jazz composer and pianist who sometimes basked in the limelight, but sporadically so. He wrote beautiful music, some in the so-called "third stream" mode, but rarely was named in short lists of top jazz composers of his era. Nevertheless he left behind a discography of fine albums, many now rather obscure, and is remembered by those who know the history of the recent jazz present as a figure deserving a hearing, one often inspired to make music of an extraordinarily high caliber.

Thankfully, Clare towards the end of his life and posthumously has benefited by several releases of his more ambitious concert music that has otherwise been unheard. Today we look at one, an all-orchestral disk giving us three compositions well worth hearing, After the Rain (self-released CFP012201).

"The Suite for Cello & String Orchestra" is in three movements, the first two with a singing neo-romantic quality that is quite pretty and well-wrought. "After the Rain" is the title of the first movement. There is no readily apparent relation to the Coltrane piece except in mood. The second movement was penned in 1947! The others were written in the '90s it seems. The third movement brings a bit more grit into play and has more of a thematic punch to it. This is music that does not have a pronounced jazz sensibility but shows a mastery of string writing. No wonder he was busy as the string sweetening guy for artists like Prince and Michael Jackson. But the third movement is much more substantial than sweet.

"Time Piece" continues the substantiality with three movements for full orchestra that have modern complexity and compositional flow. The first movement was written out in part in 1953, completed in 1987. The other movements are partly early, partly later, but it all flows together as one unified work. There is more of a third stream quality here, with phrasings and melodic-harmonic cross-pollinations of classical and jazz. It has more of Clare Fischer's thematic knack and musical dexterity at play. This is the Clare Fischer I appreciate. Nothing is predictable and the orchestral colors and pianistic outlook is very much at hand in the best ways. Rather brilliant music, especially the "Blues" and "Fugue" sections. There are orchestrational touches of sheer inspiration and there is memorable music throughout.

"Bachludes I & II" were recorded in the 1980s. They revel in the harmonic thrust of Bach's music, but then transform in Fischer's hands to a less contrapuntal, more fully drenched string concordance. This is music with the sure musical sense of Maestro Fischer. Very beautifully done.

So here we have a disk that has spots of true brilliance, decent recordings and performances of orchestral Fischer. They are quite revealing, showing a side of his music we saw far too little of. Only the middle work has a pronounced jazz-classical nexus and that is worth the price of admission alone. The other works show a Fischer concerned with taking a compositional stance as someone in the modern classical mode. All of the strictly classical Fischer here is worth hearing, the final movement of the "Suite" and the "Bachludes" particularly.

There is a further volume (and a new one coming) that I'll cover here shortly. Fischer fans will find this an ear opener. It's good music, whether you know Fischer's work or not.