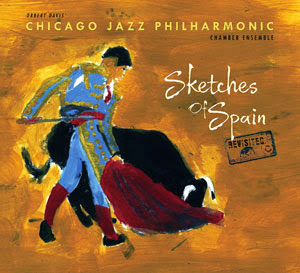 Jazz repertoire can be a tricky thing. If the music was poorly recorded in the early days of the 78, then there can be valid reasons to re-address the music. Otherwise, to my mind, why redo something unless you are going to do it differently?

Sketches of Spain, the Miles Davis/Gil Evans classic is a good case in point. Lew Soloff and Steve Richman did a remake of the music that I reviewed here on January 18, 2011. I liked that Lew was doing Lew and that was fine.

Now we have another version, a bit more radically reworked, by trumpeter Orbert Davis and the Chicago Jazz Philharmonic (316 Records 31607). Like the Davis-Evans version they start with the final movement of the beautiful "Concierto de Aranjuez" and end with Gil Evans' "Solea", but more or less that's where the commonality resides. For those two movements Evans' wind writing remains the same (minus bassoon), but the rest is changed. Orbert reduces the trumpet-brass section and adds a string quartet, oud, and another percussionist. He reframes those arrangements, more on that in a minute, and replaces the center three movements with two new originals and an arrangement of "El Albaicin", originally written for piano by Albeniz and now converted into a showcase for string quartet.

The new movements are quite Spanish in sound and give us something different to contemplate. The arrangements to the remaining outer movements have less of that Evans' impressionistic touch, the middle movements are so different that you probably are best to forget the original version as you listen, and Orbert in the solo trumpet role makes no attempt to channel Miles so much as strike off on his own. He sounds convincing as Orbert Davis. That's what counts. And the whole thing is in a slightly transposed mood.

Is this version "better" than the original? No, I would not say that. Get the original Miles/Evans recording for its magic. No one could have done what they did better because they were originals of the highest order. But the Orbert Davis version is in reality a new thing altogether, appealing in very many ways, a brand new piece of music on the whole.

So it is recommended, quite enjoyable and engrossing. It just isn't the same as the original. So start there first. If you already have, this incarnation gives you something different. And it is good. There you go.