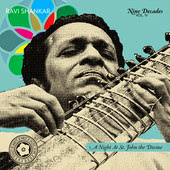 East Meets West Music's ongoing project of digitizing and making available some of Pandit Ravi Shankar's recorded performances is surely a noble one. The fruits of this endeavor can be readily enjoyed in the latest release, A Night At St. John the Divine, Nine Decades Vol. IV (East Meets West 1013), a recording made at New York City's imposing cathedral on August 6, 1976, an all-night concert celebrating the then 20th anniversary of his first US concert.

It must have been some night, with a full troupe of Indian classical masters each giving a recital segment, climaxing with Ravi Shankar appearing with Alla Rakha for a performance of two ragas that coincided with the summer dawn.

It is of course Ravi at the peak of his powers in many ways and the performance lives up to how masterful and brilliant an artist he had become. Pandit Shankar's affiliation with tabla master Ustad Alla Rakha was his most famous, at least here in the West, and for good reason. The recording of Raga Vachaspati that concludes the recital tells you why--especially in the magical concluding movement where a rhythmic figure of four-fours plus "one-half and one half" holds sway. The pattern is brilliantly worked around by Shankar and Rakha with the exceptional creativity and rapport that they had developed working together for so long.

The performance of Multani has a long and moving alap and beyond. It is one of those magical performances that Ravi could give us, akin to his recording of Raga Bhimpalasi from the famous Monterey performance some years before. His exploration of the lower register of the sitar with shruti bends and finesse has something extra-worldly about it, but then of course he goes on from there with customary brilliance.

In short this is prime Ravi Shankar, essential though as yet unknown until now for all those who had the misfortune of missing the performance. I believe I was working the midnight shift that night in New Jersey. For myself and the rest of us who couldn't be there this is a revelation; for those who were it will be a moving reminder, an excellently recorded commemoration and celebration.