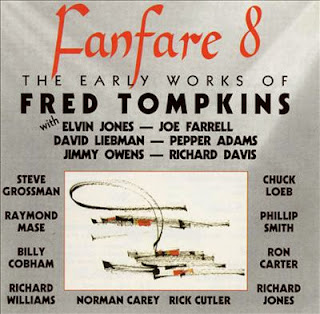 I had the good fortune to come across the music of Fred Tompkins partly because I was studying way back when with the great Elvin Jones, and Fred put out one or two albums of his music (distributed by the JCOA folks) that Elvin mentioned to me. Elvin was on much of the music, plus some great players like Jimmy Owens, Farrell, Liebman, Pepper Adams, Grossman, Richard Davis, Ron Carter, etc.

Fred's music combined modern classical and jazz in ways nobody else quite managed to pull off then, so I was quickly converted to a great appreciation of his compositions.

Time went by, I had to sell my first record collection to help raise money for grad school, and by the time all that was over I could not find the albums again.

Quite thankfully Fred has been in touch (because of my blogs) and has sent me a CD compilation of those years, Fanfare 8: The Early Works of Fred Tompkins (F.K.T. Records). I am glad he did. If anything the music sounds even better to me now than it did then, partially because there was so much I was trying to absorb in those days I suppose. But also because it now seems clearer how good these works are since we can hear them fresh again in a later era.

Fanfare 8 gives you a bumper crop of Tompkins works from those days, with the jazz luminaries holding forth but always in the compositional frameworks Fred set up. There are 14 compositions in all represented here, all in their own way gems, covering the period of 1967-1981.

The rhythm sections improvise, there are horn solos here and there. The rest is as Fred notated the works. This was a great idea as the works swing (greatly, especially with Elvin in there) yet there is modern classical structure and jazz feel combined.

I won't run through a description of each, because the music speaks so eloquently that my words don't seem necessary. It is a blockbuster collection for anyone interested in the modern nexus. Tompkins was one of the greatest, if lesser known, of the so-called "third-stream" composers. He's still at it, too, but has as expected evolved. I have a newer disk I'll cover soon.

In the meantime don't miss this one. It is exceptional.