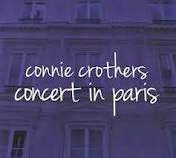 One of the beautiful things about improvised music of course is that the place and time the music is created can have a huge effect on the performance. Inspiration can be heightened by those intersections, and we can get music that surpasses even what we might come to expect from an artist of the first rank. Connie Crothers' Concert in Paris (New Artists 1059) has that quality.

Both Connie's presence in Paris for the occasion of this concert and her first trip there as a student in the late '50s, which was a life-changing epiphany as the liners recount, give impetus to some really inspired pianism. "Deuxieme Naissance" and "Dans Mes Reves" open the concert with some truly transcendent music related to the here and now and the there and then, and yet beyond both. It's as if Maestro Crothers takes all the music that followed from the kismetic trip and synthesizes it into a total summing. Blues phrasing, bop implications are there and yet the full pallet of all the notes are harnessed to an ultra-expressive, ultra-pianistic narrative of feelings. On this opening segment its as if she pulls together everything she is, everything she has been, and puts it all together in total oneness.

Not that the music that follows is in any way lacking, it keeps the momentum going. "How Deep is the Ocean", "Come Rain or Come Shine" and an earlier Crothers piece "Carol's Dream" come into play as she revels in expressive high after high. Avant atonality and jazz-rooted tonality mix together seamlessly for some very poetic stratus elevations.

"Hommage Aux Commundards" has a rather sober cast to it compared to the elation of the earlier segments, but it is quite understandable given her subject--the Paris Commune of earlier times and its fervent aspirations for freedom and a new order. The music does not flag so much as it becomes more introspective, more searching in its dynamic, initially. This might be the place to comment that somehow Connie channels avant classical composers, but really I don't think she does that directly so much as she widens her scope to phrase outside of considerations of jazz per se in the historic sense. It's still all Connie, just as Cecil plays all Cecil and if you can draw parallels to modern classical they have been transformed. So also Connie. This is about an in-the-moment expressiveness coupled with an internally cultivated originality. To me it still epitomises what jazz is about--the lines and the blocks of chordality are about the telling, not so much the form the telling takes, though that too is innovative. It's a matter of emphasis.

"Espoir" gives us the concluding segment of the concert. I'd like to say, "there, you can hear her channeling Roy Eldridge" but she has long gone beyond her well-loved influences, the giants that have come before her and us, to create Connie-music. "Espoir" reflects almost nostalgically on "Come Rain or Come Shine" and it is poetic, filled perhaps with those thoughts we get when we recall a formative past that is now distant yet never really gone. After all the expression that has gone into the concert, we seem to feel, like Billy Strayhorn, "after all...", after all, there we are today, filled with our lives, codifying, condensing, transforming all we have lived through into our art. Certainly Connie does that on this very beautiful recording.

And perhaps, given the exceptional quality of the music here, we can learn from what a master of music does after a lifetime of playing and living. She does not go back. She goes forward but perhaps with a new feeling for all that has gone into who she is now, musically and personally.

I do not wish to put words in her mouth. The music itself speaks to us. It says, "this is what my life has made me. This is the music that most expresses that." And so it is. Concert in Paris gives us a high point among high points. It is all that makes Connie a great artist. It is seminal music. I cannot say more because there is no need to say more.

Just get this one!!