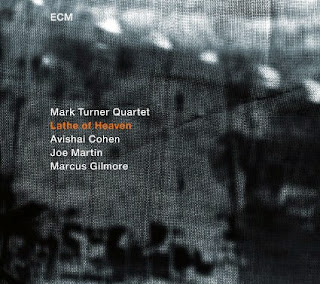 There was a time several decades ago when tenor player Mark Turner seemed poised for a major career as a jazz leader. What happened? Nothing, really. I mean nothing that had to do directly with Mark Tuner as an artist. It turned out that various factors in the economy and the difficulties faced by the music industry translated into the partial eclipse of the jazz world as a star-making apparatus. It wasn't that Mark's music wasn't up to snuff, it was a matter of the launch into super-stardom. Very few if any serious players have dominated in this way in the recent past.

I am not here to lament that, nor am I here to approve of it. It simply is a factor of the present-day. But here we have a new Mark Turner album on ECM, the Mark Turner Quartet coming forth with Lathe of Heaven (ECM 2357). It is a deceptively subtle outing, filled with mid-tempo music that is not exactly laid back, but musically concentric in a way that sometimes reminds of parts of Miles' Filles de Kilimanjaro in its attention to the chamber sophistication of the writing and the two-horn interplay.

The band is a good one, with Mark of course on tenor, Avishai Cohen on trumpet, Joe Martin on double bass, and Marcus Gilmore on drums. All contribute to the whole as a group, and the compositions set the mood, which is more introspective than perhaps one might expect from Turner. Yet that quality is accentuated by the tenor-trumpet interplay and the significant soloing of Mark especially. There is a melodic immediacy in his playing which was always there but seems further developed in its fluidity more now than ever. Avishai Cohen also has some beautiful solo moments here.

It is an album that has its way and creates real beauty, yet may take a few listens to really appreciate. Chamber jazz of a high level is the order of the day, and all excel under Turner's sure leadership. This may be the most exemplary instance of Mark making a impactful musical statement as a leader. Not that anything was lacking before, just that Mark Turner has come closer to realizing an original group sound. The ECM ethos is all over this music, true, but it is completely personalized to express what Mark Turner has become so completely. Himself.

Posted by Grego Applegate Edwards at 6:18 AM