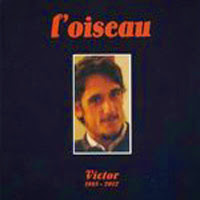 Jean-Marc Foussat has an active presence in Europe as an avant-garde composer-improvisor who occupies a space on the free-avant jazz scene. The CD at hand today would appear to be pure composition, an elaborate noise-and-tone electronic music suite, L'oiseau (FOU CD-01). It is in memory of his son Victor (1985-2012), a memento mori honoring his passing.

The work is in two central sections, "L'oiseau" itself, and "La vie s'arrete". In between is the voice of Victor himself, reciting a brief poem.

Foussat's music must be digested in several hearings to be fully appreciated. Loops and their subtle use contrast against sometimes very thick, noisy soundscape panoramas. Pattern and form emerge from the seeming chaos as one listens repeatedly.

It shows us an electronic composer who does not attempt to construct sounds to comfort the audience. It is rather music on the edge of itself, not disturbing as much as expressionistic. Walls of sound vary in intensity and density in ways that seem to express that which words fail to do. The bird-like, the living creation sort of sounds contrast against a sort of brutal industrialism in a dichotomy that fascinates as it perhaps gives us pause. We do live in such a multivalent world. There is no one, yet all of it gives us one experience, of our lives. Of Victor's life.

That is my impression, not necessarily exactly what Jean-Marc intended. Suffice to say that this music becomes intelligible when one listens closely and repeatedly. I find it very engaging, intense, yet also very poetic.

Recommended for those avant adventurists out there.