Matthew Shipp, I've Been to Many Places 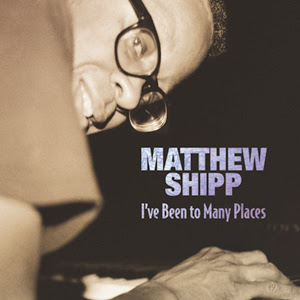 Just coming out now is the latest solo piano album from Matthew Shipp, I've Been to Many Places (Thirsty Ear 57209.2). It marks a point of departure for Matthew in that he in essence is summing up his musical endeavors, looking backwards and by being where he is now making of that looking back something new.

That of course has to do with Matthew's emphasis on the spontaneity of his musical invention. How he plays something he did years ago now is not reproduction but rather re-creation. So we get "Tenderly", recorded originally with David S. Ware's Quartet, "Summertime", first recorded in duet with William Parker, and "Where is the Love," which was used as a loop on a recording with hip-hop artist El-p. And what he does with all of these is to renew them, to make them anew. Such is the case throughout.

As Matt himself suggests on the liners, this album gives us a kind of culmination of Matthew the musical thinker executed one-to-one from thoughts to keys. He is charged with kinetic electricity throughout, taking a step from freedom of expression to a kind of mind-meld of Matt-inside-his-pianistic-head.

The set has real flow. The difference between open-form key weaving and "standard" is one of setting loose the harmonic-melodic familiarity of a song form with the same attention to being in the now of creation.

It gives you an excellent picture of Maestro Shipp as he expresses himself today, right now. And for that it is exceptional. There is nothing that sounds tentative. All sound is in command and commanding. The two versions of "Where is the Love" spell that out nicely. One is filled with forward momentum, the other more reflective. And if there was a third version, it would be no doubt something else again. He has his piano sound directly wired into his creative head, from a jab or a legato phrase to the way he makes the piano sustain when he wants it to. He is moulding the sound at every moment in his own vision.

I've Been to Many Places has all the makings of one of the prime improvisational piano solo albums of the year, maybe the album. Needless to say I recommend you get it!