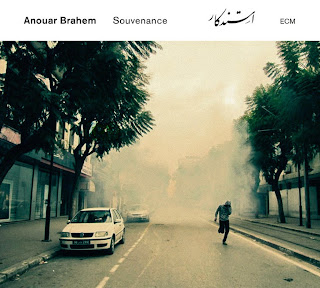 Today, something quite unusual. Oudist-composer Anouar Brahem has given us a two-CD set of music for quartet and string orchestra, which he calls Souvenance (ECM 2423/24). It is an offering unusual even for the still adventurous ECM label. A quartet of Brahem on oud, Francois Couturier, piano, Klaus Gesing on bass clarinet, and Bjorn Meyer on electric bass form the core of the music. They are greatly enriched at times by the strings of Orchestra della Svizzera Italiana under conductor Pietro Mianiti. The orchestral arrangements are a collaboration between Brahem and Johannes Berauer, except one piece which was arranged by Tonu Korvits.

Essentially this is music written around the quartet, giving written and improvisational emphasis for the oud and other instruments at times. The music is both mid-eastern classically influenced as well as post-modern tonal. The strings play their role well as called for, so that this is a sort of world-jazz-modern classical synergy with an ECM ambience, sounding beautifully well but as contentful as it is pleasing.

Some of the music is extremely reflective, some has pulse and improvisational-melodic buoyancy. All of it captures your ears with beauty and a little grit, if you are open and let the music enter within.

I know of nothing quite like it for its introduction of oud tonality into an all-encompassing, eclectically processual yet brightly original mix.

Very moving music, this is. Give it a chance and you will fall under its spell.