Sun Ra and His Intergalactic Research Arkestra, It's After the End of the World Reissue 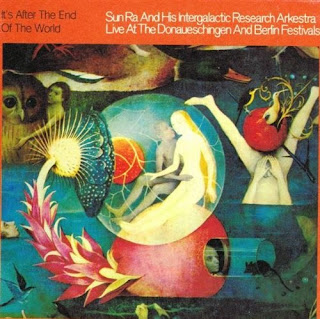 Anybody who reads this review column regularly probably also knows that Sun Ra was a critical force in avant jazz during his long and prolific career. He came to fashion free-avant big-band music after having put down strong roots in the music that came before. His combination of Afro-science-fiction and very daring music composition and conduction, his own keyboard work and the great contribution of solo work by masters of outness such as John Gilmore and Marshall Allen, his always adventuresome theatrics, all created an inimitable niche for his music, a somewhat surprising popularity among general audiences given the progressive nature of the music, and a legacy we still can appreciate.

So when the MPS reissues in their first phase included the full band live at Donaueschingen and Berlin in 1970, namely the album It's After the End of the World (MPS 0209744), I jumped at the chance to hear it again (I had it as an LP in my early days before I had to sell my first collection) and give it a review.

It may not be his very best album. There are others that might qualify for that status, but it is very good and very characteristic of what the Arkestra was up to live in those days. The full band of the period is on hand, including Gilmore, Allen, Pat Patrick, Danny Davis, Danny Thompson, Alan Silva, Lex Humphries, June Tyson, etc. There are free spots for various soloists, mass freedom ensemble improvisations, chants, theatrics, the Sun Ra space synth, some written vehicles (check out "Watusi, Egyptian March") and a series of duos.

It is well done and well captured, an excellent example of the band when it was starting to get real attention.

So by all means, any serious student of the Ra approach needs this one, and it's not a bad way to start out your journey into Ra's space either.