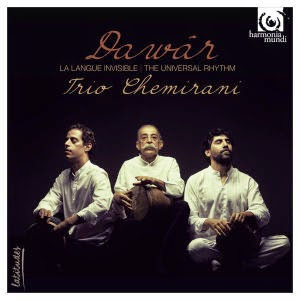 Anyone who knows or is curious about Persian classical music, and anyone who appreciates fine drumming must go and buy the new album by Trio Chemirani, Dawar (Harmonia Mundi 905723). Perhaps that is an extremely partisan way to begin a review article, but of course music writing should be about that. And from the first hearing Dawar brought me under its spell, where I remain.

Djamchid Chemirani, Teheran-born classicist who first recorded for Harmonia Mundi 40 years ago, heads the trio that includes his sons Keyvan and Bijan. They bring us a program that alternates vividly between string and percussion music that accompanies recitation of what sounds like classic Iranian poets, really brief and fascinating interludes between some incredible three-way drum pieces for tumbak, the single-headed hand drum so central to Persian classical music, with a highly developed virtuoso style and a multitude of stroke types. I've never heard a tumbak trio and I've rarely heard such skillfully wrought playing, but when worked through as a trio the sounds are nothing short of incredible.

The trio also do a trio piece on the daf, a large frame drum with jingles attached so that the sound is somewhere between the conventional frame drum and the tambourine.

The intricate interplay of the three on both drums is astounding, if I might say. They've worked out routines and tuned the drums so that the combination of all three gives you a wider tonal spectrum than just one drum, something you hear in South Asia with multiple tuned tablas and the tabla tarang, and also can be heard in some traditional Thai drum ensembles. But all that is only to reference similarities, for Trio Chemirani follow the classical Persian style and take it somewhere very beautiful.

I can only tell you that this is an essential disk for those who revel in "world" percussion, hand drum mastery, and a revelation for those who delve in Persian classical.