Kris Davis Trio, Waiting for You to Grow 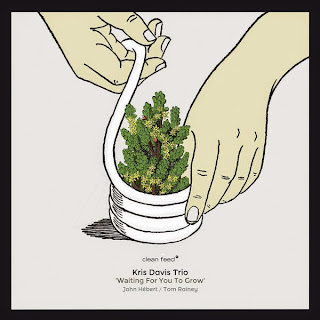 I don't like to think in terms of gender as a rule. I feel strongly that women and men need to be heard and that means more women need to be included. But in the end I feel uncomfortable then separating them out, like I might do by introducing Kris Davis as "one of the foremost upcoming women pianists on the avant jazz scene," even though that seems true. The point is in what she does in the end. And that's what comes through on her Kris Davis Trio outing Waiting for You to Grow (Clean Feed 292).

This is serious trio music in a consistently avant mode. Kris never veers into an overtly Bley melodic-out-chordal mode nor in a Cecil Taylorian scatter style, but stays somewhere in the middle to find her own path. There are melodic-rhythmic compositional elements that have some relationship to new music classicism but again, not overtly. She sometimes moderately prepares the strings on the piano, but not in a central way.

What this is has to do with a new take on the trio as building block. There is innovation and style in what Kris, bassist John Hebert and drummer Tom Rainey do here. It is not always a matter of soloist and rhythm as it is a concerted three-part dialog at times. Yet at other times the free-trio paradigm in-and-out of time prevails without necessarily going to the typical places such trios often do. Hebert sounds great and Rainey sounds right. The three sound as their own stylistic universe.

Instead there is inventive leverage from all three, with the pianist taking the lead in ways that make you listen up. The pianism of Ms. Davis comes to us without a doubt. She is both outside-inventive and pianistically coherent at all times. And Hebert-Rainey as co-constructors make for a whole you listen to as a gestalt more than solo and background.

It's a strong showing from a pianistic talent destined no doubt to become more and more central as the years unravel. I do predict that. For now the promise is showing itself without hesitation.

Listen to this one!