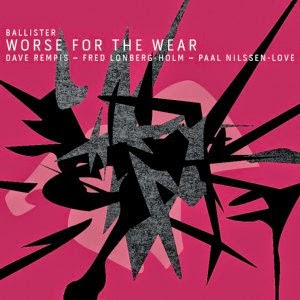 Dave Rempis's Aerophonic label has gotten off to an auspicious start with some very interesting albums. Up today is one by the trio called Ballister, Worse for the Wear (Aerophonic 008). You know it means business from the first moments of the opening. Fred Lonberg-Holm makes free use of electronics to alter his cello at times and that helps give the music an electric jolt that has a "take no prisoners" approach to avant improvisation. This music rivets you to your chair!

Paal Nilssen-Love of course is one of the more celebrated free drummers to come out of Europe and you hear very clearly why that is the case on this album. He is a bubbling, boiling cauldron of energy that spikes the trio and sends them rocketing forward. With his energy and the cello-plus-electronics of Lonberg-Holm the stage is perfectly set for Dave Rempis to put across his smart high-energy playing on alto, tenor and baritone. He reacts with blazing, searing torrents of sound that remind you that there has developed a fire-y wing of the "free jazz" school (which has been with us since nearly the music's beginnings) and Dave is an excellent, original exponent of it, one of the select top avant hornmen coming out of Chicago.

The three together melt the cosmos into liquid fire on this one. They are supercharged and extraordinarily impolite about it. You would not put this one on for a white-tie dinner party (do they still have such things?), nor is it intended for such occasions. Rather than seat you in front of an elegant place-setting it rockets you off the planet.

It is one of Dave's most energized performances on disk and the same might be said of his trio-mates Lonberg-Holm and Nilsson-Love. And the quieter moments when they come are far more than pauses in the action; they are cohesive free statements with less energy but lots of texture and a sense of structure that Ballister never abandons.

Hold on to your hats and put this one on. Get it by all means if you revel in free heat! It will drive the cold winter away, bring out the blooms of spring or transform whatever season you are in into Ballister-time!