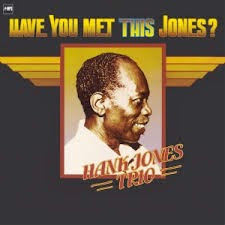 Why is it that the late piano master Hank Jones is someone I appreciate greatly, yet often enough don't recall when I mentally compile lists of the best pianists of the bop and post-bop periods? I don't have an answer but I can say that the reissue of his 1977 MPS trio recording Have You Met This Jones? (MPS 0209731) reminds me of his brilliance forcefully. Like many in the new MPS reissue series, I cannot remember seeing this album in the record stacks of local shops. It turns out that I missed something excellent.

It is Hank with a rather obscure yet very simpatico bassist and drummer, namely Isla Eckinger and Kurt Bong, respectively. Bong swings along nicely and Eckinger digs in with some excellent ears. But Hank is what this is all about.

They go at a Jones original, a number by brother Thad, and some select standard chestnuts like "Robbin's Nest," "Now's the Time," "There's A Small Hotel" and such. Everything works out as a series of vehicles for Hank's playing as it was then, and he was very much at a peak. The thing about his playing as I listen to this one, that hits me with renewed force, is not just that he could build impeccable post-Bud-Powell bop-and-beyond lines of great swinging distinction, and he does here, but also that as a chordal, a block-chord soloist he was in a league of his own, untouchable. Listen to some of that here and you get perfection. Perhaps it all sounds so effortless that we didn't always stop and pay real attention to the WHAT that he was doing.

It is all very present on this album, Hank in all his brilliance. There was so much music to digest from the '50s through '70s that he may have been somewhat neglected. Of course in the end he got some of his due --in later years, as a fixture at the Vanguard and in his very fruitful collaborations with Joe Lovano.

When we step back and hear this nearly forgotten session from Europe, there is no doubt. He was a monster of a pianist! Get this one.