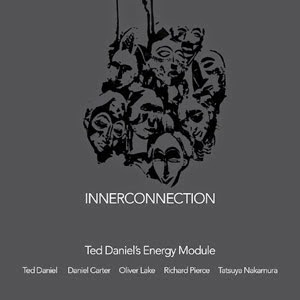 Trumpetmaster avant jazz composer and leader Ted Daniel does not always get the attention he deserves. Perhaps his best known affiliation was with Dewey Redman. He appeared on Dewey's Ear of the Behearer and Coincide (Impulse) and was very crucial to the outcome of those sessions. Yet of course there has been much more.

An example of a very together small group that only existed through two gigs, Ted Daniel's Energy Module, is now available for us to hear in the freewheeling, exciting 2-CD set Interconnection (No Business CD 72-73) which was recorded live at Sunrise Studios in Manhattan in 1975.

It was a group that functioned together as part of Daniel's big band Energy. Yet this quintet was more oriented towards the full-out freedom of the big-arc improvisational approaches then flourishing among the giants of the Loft Scene. The band is exceptional and well-spoken in the presences of Ted on trumpet, flugel, etc., Daniel Carter on tenor, Oliver Lake on alto, soprano, flute, etc., Richard Pierce on bass and Tatsuya Nakamura on drums.

This is a richly energized blowing date all the way. The repertoire serves effectively to launch the improvising. It has some new thing staples in Sunny Murray's "Jiblet," Ayler's "Ghosts," Ornette's "Congeniality," plus Dewey Redman's "Interconnection," and three originals by Daniel: "The Probe," "Entering," and "Pagan Spain."

The recording is quite clear and decent, the performances inspired. Pierce and Nakamura lay out thick washes of rhythm section energy while Daniel, Carter and Lake make definitive statements both together and in individual solos.

There is nothing one-off sounding about this music. They give it their all and have a dynamic presence that belies their short official existence as a unit.