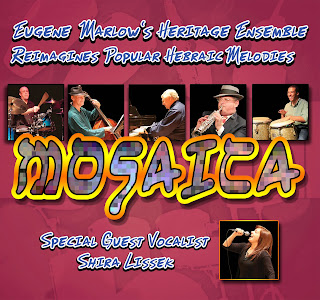 You have to hand it to pianist-arranger-bandleader Eugene Marlow and his Heritage Ensemble. He takes Hebraic folkways and makes them into vibrant modern jazz. Who else could breathe real life into "Hava Nagila" the way he does and then let the band scorch it with a Latin fire? Well, the list would be small. Eugene Marlow is at the top. His Heritage Ensemble comes at us again on Mosaica, subtitled Marlow's Heritage Ensemble Reimagines Popular Hebraic Melodies (ME II Enterprises).

The band is as strong as ever with Eugene taking a central role in the piano chair, the ever-buoyant Bobby Sanabria playing his usual key part as the Latin sparkplug on drums and percussion, Michael Hashim a blazing presence on soprano and alto, Frank Wagner on acoustic and electric bass, Matthew Gonzalez on percussion and special guest Shira Lissek on vocals, sounding great.

The material many will recognize if they have grown up in a Jewish neighborhood and/or of course are Jewish themselves. But this is music that goes well-beyond the local to make universal significance out of it all. Then again, of course the local done well is but an instance of the universal in action. No matter. The point is that Eugene's pianism and arranging brilliance and the band's vivid talent and heat make for music EVERYBODY should hear.

Then also all should remember the horrors of Kristallnacht as a cautionary tale, something that must not happen again on whatever terms. The final piece is a heartfelt tribute to those who suffered the horrors of that night.

This is masterful. This is exciting music. The Doctor is in the house!! Don't miss it.