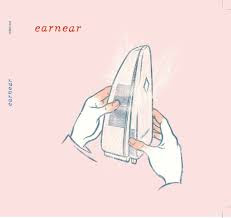 Where does music stop? Is there some end-point where listeners can permanently rest, never having to hear new music again? Well, in spite of the behavior of some listeners, it can never happen, as long as we are here on this planet (or other planets, that's a thought).

Giving the continual change or evolution in music, we all should try to keep our ears open, to listen to what's new, to patronize our living artists as well as those masters that have gone before.

With that in mind I introduce to you a new album in the advanced improvisational realm. It's a trio of Portuguese new music/avant jazz artists. The album is entitled earnear (tour de bras 9012). You may be familiar with some or all of them. Joao Camoes is on viola, Rodrigo Pinheiro on piano, and Miguel Mira on cello. They hold forth very inventively in eight segments that have contrasts both subtle and/or overt.

It is very much a trio effort, with inspired three-way improvisations that sound in the end a bit more new music oriented than jazz-like. Extended techniques, moody tripartite sound staging, a sense of textural, timbral innovative flow all prevail.

There are no solos in the conventional sense. All create a pointedly punctuated, interwoven carpet that is often radically unconcerned with a key center, though one might with some effort locate one at such times. Other times the center is primally present. The point is in the interaction of widely variable sound collages born of the moment and continued over time.

The sensitivity of each musician towards the others is what makes this set stand out. Each are virtuosos in sound production and they prevail beautifully. This is music that is sometimes more meditative, other times extrovertedly gestural.

It succeeds consistently thanks to the spontaneous intelligence of the triple utterance. Oh, and yes there is spirit here in the performances, too. Plenty of it.

What you get in the end is some very cohesive improvised new music from three musicians of rather brilliant inventiveness. It is a great example of new European chamber improvisation. It has a coherence of moods and a sureness of gesture.

Very recommended if you seek an experimental chamber nowness!