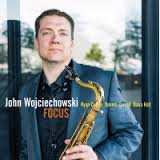 Chicago tenors? Gene Ammons, Von Freeman, John Gilmore immediately come to mind. But they have passed and so must the torch. There has been no shortage of new voices on the tenor from Chicagoland, of course. Today another, one I have not been exposed to previously. John Wojciechowski plays tenor, alto and soprano on his second album, Focus (Origin 82699), but the tenor work is perhaps the most striking.

He fronts an excellent band for this outing, with three musicians he has worked with a good bit. The togetherness of hours on the bandstand comes through well. Ryan Cohan joins him on piano and Rhodes, Dennis Carroll on bass and Dana Hall on drums. They form a tightly together, loosely fluid nucleus for the seven Wojciechowski originals, the one by Dana Hall, and Monk and Brubeck gems.

The music is in the advanced-edge mainstream, post-mid-Trane, post-Blue Note, changes oriented and noteful, swinging in the detailed open way. Everybody sounds great, Cohan solos with power, and the rhythm team is impeccable.

Understandably this is Wojciechowski's day in the sun, though, and he especially stands out. The soprano and alto work is excellent, but his tenor reminds us that there are edge-mainstream cats coming out now who do not sound like they are under the spell of Lovano and some of the Boston cats, that there is another way through. Wojciechowski finds a way by embracing the roots and making them personal. He has the sort of solo style that has a building, a beginning, middle and end, an overall arc that keeps you interested and earful.

I listen one more time as I write this, and I am saying to myself, "yeah!" This is a complete statement, from heads to rhythm to solo. It sings forth nicely. It may well be accessible to everyday folks out there but it does NOT pander. There is integrity and there is talent.

I say yeah! John is a player to watch. To listen to.