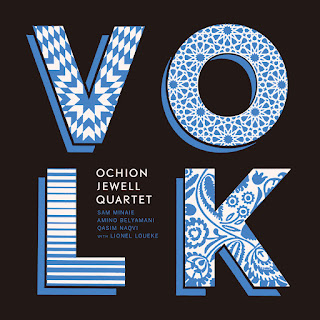 Ochion Jewell takes a personal encounter with police brutality in New York City and makes some excellent music that exorcises it, or at least goes a ways in doing that. In a case of apparently mistaken identity, in 2011 Ochion was accosted in a train station by plainsclothesmen, strangled into unconsciousness, then held on phony charges that included planting evidence on him. The case was dismissed, ultimately, but the effects on Ochion's psyche were lasting. From all this comes his excellent second album, Volk (Self Released), based on various world folk musics. By affirming the humanity of music Jewell reaffirms the birthright of peaceful existence, or at least that's my take.

Ochion holds forth on tenor sax in original and very soulful ways. He brings to the session his quartet of long-standing status: Amino Belyamani, a pianist from Morocco, Sam Minale, Persian-American bassist, and Qasim Naqvi, drummer of Parkistani-American heritage. They are joined by guest Lionel Loueke (born in Benin) on guitar.

This is music that jumps out at you as outstanding from the first. Ochion is simultaneously gruff and lyrical, soulful and cerebral, and the folk music resituated gives the band an avant but rootsy and tonal matrix that all the band members take advantage of to give us some really fine modern jazz. It's freewheeling but not always in the realm of super-edgy, which of course is fine, though Ochion lets loose at times in ways that are nothing short of great. The noteful charms of Ochion, Amino and Sam mix with freetime and rhythmically stop-and-go routines initiated mostly by Benyamini. Altogether in this way everything comes across as fascinatingly dramatic and very musical.

Ochion has all the makings of a tenor master and his band is something to hear. Anybody who wants to get with some new sounds must hear this, no kidding! Music hath charms that may not change injustices, in itself, but it sure goes a long ways to counter it all with a life-affirming presence. That's very true here.