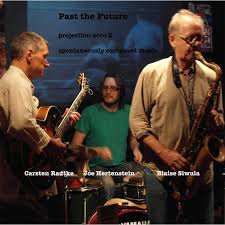 I have been listening to and appreciating saxophonist Blaise Siwula for a pretty long time now. He is a central figure in the avant free jazz realm in New York City. I don't recall hearing him more inspired in recordings as he is on the new disk Past the Future (No Frills Music NFM 0008).

It is a three-way cooperative improvisational meeting of Blaise on alto, tenor and soprano, the electric guitar of Carsten Radtke, and the drums of Joe Hertenstein. And a fine confluence is made out of the excellent chemistry the three generate together.

Joe Hertenstein is a drummer of great sound color and smarts. He unleashes his timbre-ally diverse kit and puts it to the service of creating cohesive and moving panoramas of percussive logic. His playing lays an important foundation for what the trio freely creates.

Carsten Radtke gives us some very inventive guitar work that is as unpredictable as it is diversely astute. Chordal inventiveness goes with single-lining dexterity and sound manipulation for an impressive voice in the proceedings. And what he does stays in the mind and catapults the others to overtop the norm, launch into creative overdrive.

And Blaise Siwula? He is extraordinarily articulate, blazing with a big sound on tenor, plying equally well his agilely inventive alto and his puckish soprano. This trio gathering seems to especially inspire him to go beyond to the highest realm of creative saxophony. He invokes all of his avant chops for an expressive tour de force on this one. And you can hear in his playing here as elsewhere the entire history of jazz and avant as sonic reference points on the way to his own considerable immediacy and originality. If you want to know what Blaise is about, why he is an important stylist and innovator, seek no further. You can hear it in concentrated and explosive form on this, Past the Future. His tenor playing is not often in the limelight. He sounds very much at home on it here! So that is a welcome added bonus to it all.

Ultimately the point of it all is the threesomeness that is achieved in all glory on this session. Each member carves out of his creative and preparatory actions over the years a special trio sonance, an interactive virtuosity that really puts a burn in the retro-rockets to propel them to the musical heavens.

For a jazz-rooted avant freedom this is one of the finest sessions I've heard this year. Needless to say I do strongly recommend that you grab this album.