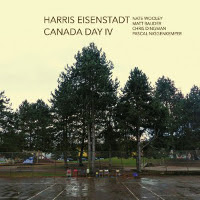 Harris Eisenstadt turned 40 last month. To celebrate it he held forth for a week at the iconic NY new jazz venue The Stone. I had planned to cover a mention of it in tandem with this new album, for it sounded quite ambitious and varied. Unfortunately the past several months have embroiled me in logistical and economic traumas that needed much of my attention (and still do) so that I somehow missed the timing of this posting by a mile. Unlike some music review institutions that operate with an abundance of reviewers, the Gapplegate "empire" consists of only me, so hardly an empire, and it involves at times a considerable amount of work just to closely listen to and schedule all the reviews. So I am most sorry to have missed the boat on the Harris birthday festivities.

But I come to you now as an enthused reviewer of this music, this new album, Canada Day IV (Songlines 16142). The Canada Day series gives us Harris Eistenstadt's primary ensemble and forms an important platform for his chamber jazz compositions. Volume IV shows an ever-growing, organic mastery of compositional structuring within an improvisational setting.

The quintet is a very accomplished combination of exceptional musicians that do full justice to the music. Most readers of this blog will recognize the names and I hope know something of the musical abilities of the group. There is Nate Wooley on trumpet, Matt Bauder on tenor, Chris Dingman on vibes, Pascal Niggencamper on bass, and of course Harris on drums.

They are put through their paces in a series of seven substantial Eisenstadt compositions. The musicians get good space for improvisations and make the most of it. The compositions have a way of permeating the improvisational segments either overtly or in terms of a specific rhythmic-harmonic-melodic mood.

What strikes me about the ensemble and Harris's helmsmanship is the continual presentation of unusually quirky, unexpected or otherwise asymmetric forms that lend themselves especially well to creative presence in the band and the personal stylistic idiosyncracies of the players. The compositions are complex enough that you as a listener grow into them over time. They are not fully grasped, at least for me, at first hearing but instead unfold their riches as you listen again. And the soloing too has a depth that becomes more and more apparent the more one hears the album.

To me that is the best sort of music, the sort of thing one continually gains from as one lives with the tracks for a while.

Harris Eisenstadt may not at this point get a huge amount of accolades out there. But to my mind he is an outstanding voice in the new jazz, a formidable talent that needs to be heard. And this is one of his very best albums. Hear it by all means. And listen more than once! Highly recommended.