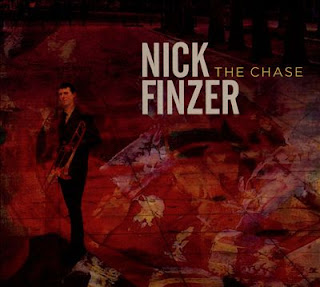 The trombone in jazz has a rich legacy. Time does not stand still for either the instrument or the music, of course. Nick Finzer is a vibrant new trombonist on the scene. We can hear what he is up to on his recent second album, The Chase (Origin 82695).

The album gives plenty of space to Finzer's noteful-soulful approach, ten of his originals and the fine band assembled for the date. Nick brings in five associates for this sextet, all who have had a close association with the bandleader and work very well together. They are Lucas Pino on tenor and bass clarinet, Alex Wintz on electric guitar, Glenn Zaleski on piano, Dave Baron, bass, and Jimmy MacBride on drums.

The frontline all have something to say as soloists, the rhythm section swings mightily, and the Finzer originals and arrangements have that sort of Blue Note bop-and-after inflection but cover new ground and set the stage well. It's a testament to Finzer's bandleading acumen and his prowess as a soloist.

Nick studied with Wycliffe Gordon, got advanced degrees from the Eastman School of Music and Julliard, and played in Truesdale's Gil Evans Project, Wynton Marsalis and the Jazz at Lincoln Center Orchestra, Frank Wess, Lew Tabackin, Frank Kimbrough and others.

He is an excellent exponent of the bop-and-after trombone, with an acuity, a sense of sound and noting that put him among the elite of mainstream trombonists and an emerging original voice in his own light.

The music to be heard on the album is, as they used to say, a solid gas. It is serious business, serious changes-based music with excellent trombonista flourish. And the band is something else, too. Highly recommended.

Posted by Grego Applegate Edwards at 5:20 AM