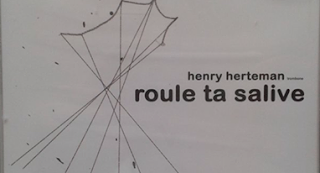 I know nothing much about trombonist Henry Herteman save what I hear on the recent solo album Roule ta Salive (Improvising Beings 34). But the album tells me all I need to know for now. This is a full album of trombone, sometimes double tracked to afford the feeling of two trombonists, with occasional audio enhancement effects. Then there is one of the 13 tracks where Henry plays melodica nicely enough.

It's a matter of free avant trombone improvisations with the accent on expression. He phrases well, gives each note timbre and color or veers off into sonic extensions, depending on the moment. He comes through as a player with both soul and a very sensitive feeling for the sounds he can get to further his musical being.

Maybe this sounds like it could be dreary? It isn't. Sure there is an awful lot of trombone on this album, but time passes quickly given Herteman's ability to come up with jazzed and new-modern extensions of himself.

He is very much ace, a trombonist of great diversity of sounds. The music fascinates. He no doubt sounds great in a group context, but you do not feel the lack when the improvs are at this level.

Posted by Grego Applegate Edwards at 5:14 AM