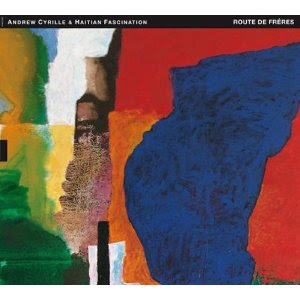 Andrew Cyrille doesn't get old, really. He ages like a fine wine. Whether playing diffuse a-rhythmic patterns or digging deep into a groove, he remains ever vital. His group Haitian Fascination presents a modern improv-centered interpretation of the Haitian Tinge, so to speak, in the slam-dunk album Route de Freres (TUM 027).

Part of the vitality of the music centers around the drum dialog between Andrew and percussionist/vocalist Frisner Augustin. Listen to what they do together as a duet and in the ensemble and you definitely get some of the hippest Afro-Haitian cross-rhythms going. Mr. Cyrille re-invents his drum style with all kinds of patterns and master-drummer solo figurations, which Frisner responds to in kind.

Lisle Atkinson plays driving ostinato patterns much of the time, with the sort of dead-center pliability that helps send the groove to the top. Alix Pascal plays very earworthy acoustic guitar comps with time and chord choice right there where they need to be. His solos make some very musical statements in ways that give the ensemble presence and depth. Augustin's vocal renditions have a Haitian realness and the phrasing that works it. Then there's Hamiet Bluiett and his baritone sax, lyrically soaring, digging deep, blasting through with righteous soul. He sounds as good as ever.

Put all that together with good song-composition-arrangements that give you a Haitian bead on the music and what do you get? An album that HAS it.
Posted by Grego Applegate Edwards at 4:53 AM