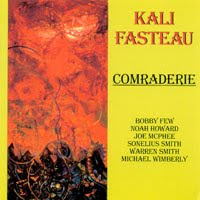 Several days ago I covered an interesting album of duets by Kali Fasteau and Donald Garrett. Today we push the clock forward to 1998 and an album of Kali with six avant players of note, Comraderie (Flying Note 9006).

It's a free date with some of the finest: Bobby Few on piano, Noah Howard, alto, Joe McPhee on tenor, Sonelius Smith, piano, Warren Smith on drums, and Mike Wimberly on djembe, talking drum and percussion. Kali wrote the compositional frameworks and plays soprano, nai & kaval flutes, cello and sheng. She also does a little vocalizing.

The session makes full and exhilarating use of the possibilities such a significant gathering of reeds offers. There are passages of collective improvisation by all hands that work within a tonality and (it seems, in the main) a basic scalar scaffolding, such as with the "Joyful Blues."

Kali's eastern-post-Trane flutes and soprano are an important component throughout, and in many ways she sets the tone for what happens. Bobby Few, the master, has some beautiful things to say on piano. But of course the saxophonists do as well. Warren Smith gives things a good kick when needed. And everybody is onto what needs to be done, and does it well.

This is a kind of spiritually based freedom music, coming out of later Trane and the inspiration of Asian music and experience. But there is music that blows bluesy blue-hot too.

It's nearly 70 minutes of getting together and reaching upwards. With the players at hand there are heights to be scaled. And they DO reach the top. Retrace the climb yourself by digging on the disk. It will get you there. Beautifully.
Posted by Grego Applegate Edwards at 5:31 AM