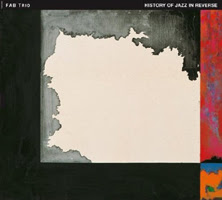 We are approaching the year point since violinist Billy Bang left us for another plane of existence (it was last April). The only consolation for those who appreciate his music is that there still remains the body of recorded works. So of course any new and substantial additions to his recorded legacy are most welcome. His recording of History of Jazz in Reverse (TUM CDE 028) as a member of the FAB Trio, with Barry Altschul and Joe Fonda, is all the more so, because it is some beautiful music.

It's the three in top form, freely kicking out the jams for an extended studio set. They engage in highly inspired, sometimes greatly swinging improvisations throughout, with Barry in top form, Joe meshing inventively and skillfully with the rhythmic and harmonic implications of the other two and adding his own good-idea styling, and then there's Billy. He sounds especially cohesive, inspired, at a peak.

The rest is probably silence this morning. Maestro Bang sounds as great as ever here, which makes you feel the loss all the more. This album is pure PRESENCE, a celebration of music. So we should hear it with the joy and appreciation of what remains! RIP Billy Bang.
Posted by Grego Applegate Edwards at 5:25 AM