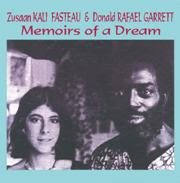 Zusaan Kali Fasteau, now better known as Kali Z. Fasteau, has a wealth of CDs available on the Flying Note label. Some are earlier recordings, some later. All have that sense of adventure and exploration so central to the new improvisational music that began coming out of jazz from the early '60s on.

Today's 2-CD set brings that idea home, with two albums recorded by Kali and the rather unsung musical explorer Donald Rafael Garrett. He recorded four albums with Trane, played with many of the masters of his era, made a couple of very interesting albums, and sadly for us, left this earth in 1989.

Memoirs of a Dream (Flying Note FNCD 9008) covers two previous unreleased duet sessions, "Streaming Love," a studio date from 1975, and "Come From Deep," recorded in concert in Ankara, Turkey in 1977. Both feature the two on any manner and number of instruments, piano, reeds, percussion, bass, vocals, etc., to produce a lively, vibrant mix of universal ethnic musics, free-form improvisations and free jazz, so called.

What's refreshing about hearing these sessions, for one thing, is how unpretentious the music is. There is plenty of musicality but it comes out with a natural quality, like Don Cherry in later years. It's human music.

Mr. Garrett takes care of the clarinet and contrabass parts; Ms. Fasteau puts together cello and piano statements; both address a battery of flutes, winds and percussion and bring in vocaleses that fit the mood of the improvs at any given point.

What in the end you hear is an evocative, atmospheric kind of free aural poetry of music. It's a good listen, a very good example of Donald Rafael Garrett in his prime, all the more valuable because there isn't enough of it, and Kali Z. Fasteau as she began her playing career, with most all the elements she has expanded upon and perfected over the years.

I'll be investigating some of Kali Fasteau's other recordings in the coming months. But meanwhile you have what was a most promising start. Stay tuned.
Posted by Grego Applegate Edwards at 5:03 AM