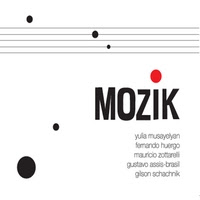 To start off the new year it's time for something that moves us along, gets us going, breaks the silence. The group Mozik and their first CD (self-released) seems like the right kind of thing. It's an internationally diverse group of musicians dedicated to the sort of samba-Latin-contemporary sound that Chick Corea, Hubert Laws and Herbie Mann gave a push to in earlier years. There are a couple of originals (by keyboardist Gilson Schachnik); otherwise the songs are central Brazilian pieces by Jobim and others, and a couple of standard songs by Monk and Hancock.

There is attention to arrangement and some solid groove building, the latter thanks to a lively rhythmn section of Schachnik along with bassist Fernando Huergo and drummer Mauricio Zottarelli. Both in time and soloing, Mauricio gives us a goodly blast of heat. Huergo has solid electric punchy-ness and sensible note choice. Schachnik straddles nicely the dual role of the pianist in this kind of ensemble: the rhythmic needs of the groove balanced with intelligent harmonic spelling. He also can turn out a nice solo. The front line of Yulia Musayelyan on flute and Gustavo Assis-Brasil (any relation to the late Victor?) on acoustic and electric guitar has consistency and poise. I am especially drawn to Mr. Assis-Brazil in his electro-samba soloing.

This music is both groove-heavy and subtle. It will appeal to lovers of the post-bossa jazz scene. And it's a promising start for Mozik.
Posted by Grego Applegate Edwards at 5:21 AM