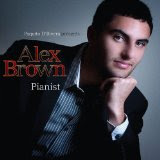 Alex Brown, young piano fire-starter, seems well on the way to a long tenure as a Latin Jazz adept, with instrumentality, leadership and conceptual-compositional flair. His first album, Alex Brown, Pianist (Paquito 4552) bears this out. It's a program of mostly Brown originals and the spark is there, from Brown and some choice sidemen.

Altoist Paquito d'Rivera, with whom Brown has had an important association, "presents" this recording and adds his alto to the brew. Warren Wolf's marimba, Ben Williams' contrabass, Eric Doob's drums, Vivek Patel's fluegel, and Pedro Martinez's Latin percussion grace the proceedings, some in and some laying out on occasion.

Danilo Perez may suggest himself for comparison. Like Perez, Brown is working on the expansion of the Latin Jazz sound to include modern jazz elements, further rhythmic sophistications and a piano style that includes some of the developments that McCoy Tyner, Herbie Hancock and Chic Corea have worked out for themselves over time. That is only to say that both pianists are of their time and have listened to what has been going on on their instrument.

But Brown is still Brown, a musician moving onward to his own turf and bringing a vibrant compositional-ensemble sound to the forefront. And in the process there is some serious burning going on!

If you like Latin Jazz you should definitely check this one out. Alex Brown is headed somewhere and we can go along for the journey.
Posted by Grego Applegate Edwards at 5:01 AM