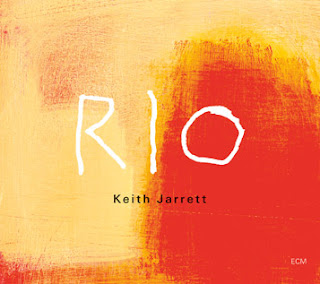 Keith Jarrett has been making music in the public eye for more than 45 years. He has made countless appearances and racked up countless releases on solo piano. So when the two-CD set Rio ECM 2198/99 came out, a solo concert appearance made in Rio de Janeiro in April of 2011, I was quite eager to find out what he had done. With all these solo appearances behind him, where Keith has gone into the arena mostly without a pre-set series of compositions to work off of, would he still be fresh? Would he still have plenty of musical ideas to put across to us, as he has done so many times before? The answer is yes. And the answer is also that the Keith Jarrett solo concert of 2011 is not the same as the solo concert of 1973.

He was grown, matured, and for various reasons he is not quite the boiling-over cauldron of energy he once was. That, however, can only be expected in an artist of his stature in later years. There was a youthful fire in his past music; with maturity there is a thoughtful re-appraisal of the various sorts of Jarrettian modes. So in this concert he gives us some of the Jarrettian boogie, the gospel-like voicings, the lyrical, harmonically intricate improvisations, the tumult of improvised notes, in fact everything except some of those long trance-repetition-rituals he used to undergo, and no obvious references to standards. And his technique is not worn on his sleeve so much any longer for various reasons. He makes every note count nowadays.

And that's what makes this concert recording more than "just another" one. The introspective Jarrett comes to be the central expressive fulcrum around which everything else revolves. And it's a pure Jarrettian series of musical statements, ever more boiled down to the essence, sometimes starkly so.

The two CDs rush past the ears in a hurry because the music is so concentrated that time seems to become suspended. It's a very focused Jarrett, older in years, confident in the expression of his life in music. Rio comes off, ultimately, as a real addition to his solo work of a near half century. May there be much more to come.
Posted by Grego Applegate Edwards at 4:42 AM