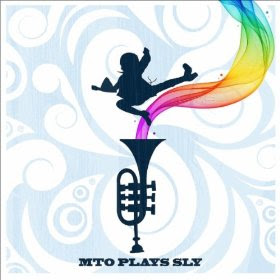 With Sly Stone reputedly at a low ebb, living in a van, financially distressed, the time is especially ripe for a revival of his music. Along comes Steven Bernstein and his Millennial Territory Orchestra and their MTO Plays Sly (Royal Potato Family). It's a joyful tribute to the man and his music with many of his well-known songs rearranged for a kind of funk-rock mini-big band, Steven Bernstein style.

The arrangements take advantage of the girth and breadth of a five-man horn section plus violin, guitar, bass, drums, vocalists and special guests to put a somewhat jazzier spin on the music. The vocalists are sometimes very good, sometimes less so but the band is filled with good sounds and solos.

This doesn't have the kind of startling quality that, say, Gil Evans's versions of Hendrix songs did. It's pretty straightforward, but sometimes somewhat quirky at the same time, like with the bluegrass meets Barney Bigard clarinet meets funk rhythm section of "Sly Motions". Guests Reid, Worrell and Laswell make their contributions count. It has a more or less broad appeal as its objective. And it succeeds in ways that do not offend the sensibilities of the keener ears out there. And let's hope the royalties Sly gets from the songs on this recording help him get back on track.
Posted by Grego Applegate Edwards at 5:22 AM