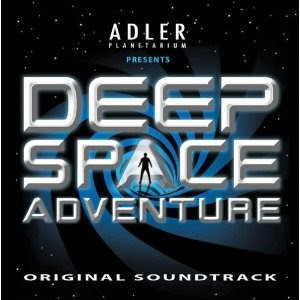 Many readers will know Andrea Centazzo as that monumental drummer-percussionist who made so many interesting albums with Steve Lacy and a slew of European avant jazz artists for Ictus records. He has another side, however, that you may not be familiar with. He is also a composer.

It is in this latter guise as well as the percussionist of stature that we encounter him on the soundtrack to the Adler Planetarium's new extravaganza, Deep Space Adventure (Ictus 210). I'll admit I wasn't quite sure what to expect when I first put this one on. Knowing the cosmic nature of planetarium shows I knew it would have some sort of space element. Beyond that I was clueless.

It turns out there is a great deal of substance going on. It's Andrea on a battery of percussion instruments, orchestral instrumentalists, and some MIDI synth and sampling production for a large-scale orchestral sound. The result is not jazz or improv, nor is it intended to be. It is a very appealing, spacey-symphonic new music excursion.

At times the percussion leads the music into minimalist-pulse directions, at times there are droning soundscapes, mysterious long notes, rich orchestral largos, spaced out gong envelopes and resonant altered tones. Sometimes the music sounds "progressive" (minus ELP or Jon Anderson). It is tonal centered for the most part, but modern sounding at the same time. And quite lyrical as well.

This is music that holds its own as music in and of itself, as composition. It is very engaging and no small feather in Maestro Centazzo's hat. Check it out.
Posted by Grego Applegate Edwards at 4:23 AM