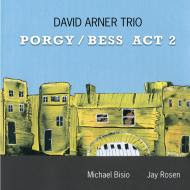 David Arner does not easily pigeonhole. In a way he's the complete jazz-improv pianist, with his sensibility steeped in jazz history and harmony, capable of evoking references to stylistic periods far flung from ours, then embarking on an outside excursion that expresses his modern avant stance beautifully. He encompasses and transforms.

So when he decided to record his impressions of Gershwin's Porgy and Bess it turned out to make lots of sense. For this project he gathered two of the finest improvisers and most sensitive bandmate interactors to go it with him together. There's Michael Bisio, a bassist of great depth and flexibility, and bandleader in his own right. And there's Jay Rosen, best known perhaps for his drumming with Trio X, a musician's drummer who can be called upon to add his trappist drum Monking to any sort of setting with success and artistry.

We looked at the first volume of the project some time ago (see posting from December 9, 2009). Today it is time for Porgy/Bess, Act 2 (CIMP 377), which is in no way a let down from volume one, but rather just as strong.

As in the first effort the principal themes of Gershwin's standards-chockablock weave in and out of the music with free interpretation, interpolation and freely articulated tangents as commentary and expressive impressions.

It's music that can be very subtle at times, very bold and assertive, others.

There is a good deal of space for Arner's fertile imagination and creative improvs. Michael and Jay play critical roles as well, and not just as accompanying fellow-travelers. There are unaccompanied solos by all as well and two- and three-way dialogues.

It shows the artistry of Mr. Arner in full bloom, and the trio at their creative best.

David Arner is one of those must-hear pianists on the scene. This is a great place to hear him. Very much recommended.
Posted by Grego Applegate Edwards at 4:42 AM