Side A, "A New Margin": Vandermark, Wiik, Taylor Get it Going 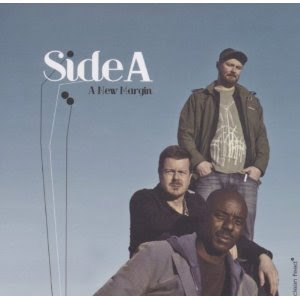 Side A? A trio of Ken Vandermark, reeds, Havard Wiik, piano, Chad Taylor, drums. Their A New Margin (Clean Feed 235) seems like the right combination of inspired improvisation, appropriate and memorable composition, and collective spark.

The compositional assignments are equally divided among the three, which makes sense since Ken and Chad do good work, and it turns out Havard does too.

"Boxer" is a fitting and stirring beginning with a sort of modified ostinato that is in a lineage to Dolphy's "Hat and Beard". Ken sounds like he is on baritone for this (and indeed for others as well, though the album jacket credits him as playing tenor and clarinet only) and he and Chad do some lively improvising. "What Is Is" switches to another interesting ostinato, and they groove on in a free rock zone, taking it out.

"Trued Right" has a chordal-melodic line in the piano that swings along well with the addition of Chad's drums. Ken's clarinet puts forth some goodly improvs.

That's a sample of what you hear. It is not all ostinato-based. There are balladic outnesses, postboppishness and some pointilistic, whole group improv phrasings too, among other things. Chad Taylor comes through with the excellent drumming he is known for. He can swing strongly in ways that reference the tradition but do so with originality. And he can get into a freetime that spurs the group on but also has a musical language going that shows you Chad the musician, the musical drummer. Havard Wiik articulates structure often enough, playing a centering role in the trio. His solos have some of the motor outness of Cecil, and the hunt-and-peck aspect of Havard's style has a kind of discursive logic--like he is saying something from A to B, B to C, sequentially. Ken V. is as always highly articulate, fired up, a person who pays as much attention to the sound he gets as to the notes he plays.

This is measured out avantness, music that has been thought through, that uses ostinato and other repetitive compositional devices in contrast with freely firey variables and/or compositionally lengthier phrasing. It is pretty tightly sequenced episodically. That makes for some exciting listening.

It's an important outing. Chad and Ken hit it off together very well here, as is no surprise, and Havard puts his piano at the center in ways that make things click. Compositional-improvisational inspiration is in no short supply throughout. One of the best out small group excursions of the year!
Posted by Grego Applegate Edwards at 4:40 AM