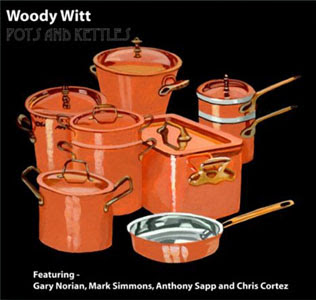 Woody Witt has been playing tenor in the public eye for a while. His fourth CD, Pots and Kettles (Blue Bamboo 017), reminds us how that is a very good thing. He joins a well heeled quartet of Gary Norian, piano, Mark Simmons, drums, Anthony Sapp, bass, and then as guest for around half the album, Chris Cortez on guitar. Norian has good comping smarts and solos in a modern post-bop manner, with some Jarrett/Corea lineage influences. The rhythm section brings on the finesse, and Cortez has some nice moments. The mostly originals program of Witt or Norian numbers is memorable, changes-based for the most part, and melodically rather strong.

Woody makes an album here that might have been made by Michael Brecker had he lived. By that I mean that there is space for solos, loosely structured soloing routines, sponaneity and form in a contemporary sense. But Witt doesn't sound like Brecker. He is strong and in a lineage that would come out the post-Trane post-Shorter players of which Brecker was most certainly an important member. Witt is a fairly new member yet he does have his own directly communicating version of the language and most certainly is a player that is adding to the conversation, so to speak.

This is quite a good listen. Promising and realized playing, nice working compositions, excellent group dynamics. Woody and you? Just add you and you have it!
Posted by Grego Applegate Edwards at 4:44 AM