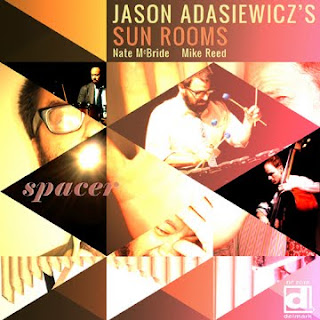 Jason Adasiewicz, in his many appear- ances in advanced Chicago lineups and his previous trio effort, has established his credentials as a most-promising cutting-edge vibist for today. With the latest trio effort from his Sun Rooms outfit, Spacer (Delmark 2012), he moves beyond the promising to the realized. The trio of Jason, Nate McBride on bass and Mike Reed, drums, presents a very swinging set of mostly Adasiewicz originals.

The group interplay is first rate, the compositional vehicles forward moving and open-ended, the performances satisfying and classical-modern. There is something of the early Bobby Hutcherson in there, but Jason takes it further into an orchestral fullness of his own. He makes good use of the sustain pedal as in the previous trio outing, but this time he zeros in on the linear creativity which was so important an element of his presence in the larger ensembles he has been a part of.

McBride and Reed propel in classic new thing ways, with their own take on the open form that brings this trio into the 21st century.

So there you have it, model performances, innovation, swinging looseness, and open-form improvisational prowess that is anything but formulaic. We see. We hear. We dig. And thanks, Sun Rooms, for the musical joy and brightness you bring to our ears.
Posted by Grego Applegate Edwards at 5:24 AM