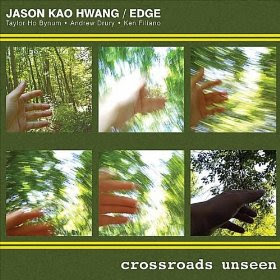 As we saw with Jason Kao Hwang's Symphony of Souls, a remarkable work for improvising string orchestra (see my review from last November at my classical music site: http://classicalmodernmusic.blogspot.com/2011/11/jason-kao-hwang-spontaneous-river.html), Jason is in a very creative phase. Concurrent with that release is an album with his smaller quartet ensemble Edge, Crossroads Unseen (Euonymus 02). This is an outfit that has been maturing with age since its founding in 2005, something like a fine wine, and the album shows how far they have gone. The group is a worthy match of Jason on violin and compositions, Taylor Ho Bynum on cornet and fluegel, Ken Filiano on contrabass, and Andrew Drury, drums. Each is known to be one of the most creative improvisors on his instrument and with Hwang's provocative and quite exceptional compositional framework things gel exceptionally well here.

It's the confluence of sound colors and zen-like musical concentration that makes this more than a mere gathering of heavies. The contrasts of open horn versus muted, pizzicato versus bow, mallets versus sticks, long notes versus movement, ensemble versus solo, all are given maximum torque with Jason's writing. It's not chamber jazz per se but it takes the idiomatic exceptionalities of each player and harnesses that (like Duke did) to a compositional vision.

There is so much going on at any given moment on this album that listening repeatedly is the only sensible way to begin to appreciate the conceptually innovative freedom that the band works out before our very ears. This is music that is more than just good; it's exceptionally so. It's one of the more important recordings of last year--Maestro Hwang is on the creative edge of the new improvisational music. If you are serious about knowing what's going on today you cannot afford to miss this one.
Posted by Grego Applegate Edwards at 4:38 AM