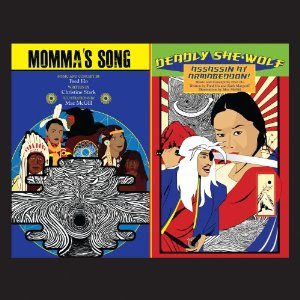 One thing I know. You can count on Fred Ho to shake up the music scene with music that is anything but complacent. The Innova (788) release Deadly She-Wolf, Assassin at Armageddon!/Momma's Song combines two collaborative works, the first (She-Wolf) a major 50-some-odd minute suite of music intended as the soundtrack to a theater piece written by Ho and Ruth Margraff. It presents an ensemble of Ho on baritone and a small group of musicians playing western and traditional Japanese instruments.

She-Wolf fascinates and rivets your attention by pitting classical Japanese elements against Ho's version of "jazz-rock." It takes a few listens to get acclimated, but it is quite worthy of your time.

The second work, Momma's Song, adapts the music and poetic essence of Archie Shepp's "Blase" and expands on it. Christine Stark wrote the new poem and it is startling in its depiction of brutality against woman, specifically the mass murder of a group of prostitutes in Vancouver. There is 20 minutes of recitation with a simultaneous Ho reworking of Shepp's music.

The CD comes with a wonderful booklet with the text from Momma and the She-Wolf script, lavishly illustrated in Manga style.

Fred Ho cannot be ignored. This is one reason why. It may not have a wall-to-wall jazz element, but that is what Mr. Ho can be about--a fusing of jazz and other musical worlds. It gives you another way into Ho's fertile musical mind. It is music of much merit!! May Mr. Ho continue on with many more years of musical brilliance.
Posted by Grego Applegate Edwards at 5:32 AM