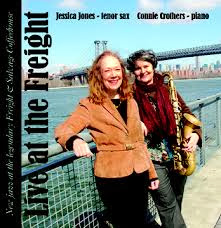 Connie Crothers is one of the living masters of the jazz piano legacy, no question. She has made album after album of original cutting-edge piano jazz, yet she also encompasses the entire tradition. Lately she hasn't channeled as much of that tradition on disk as she used to. But then enter Live at the Freight (New Artists 1056). It's Connie and the rather under-recorded Jessica Jones on alto sax, in a series of duets recorded live at the Freight & Salvage Coffeehouse in Berkeley, summer 2011.

It's a studied, exciting exercise in rethinking bop-and-after tradition, freely interpreted for the avant sensibilities of today. They tackle some of the old chestnuts like "All the Things You Are" and "There Will Never Be Another You," go full throttle into some free improvisations, and end with a Jessica Jones original.

In the process you hear some first-level interaction between Jessica and Connie. Jessica turns out to be quite well matched with Ms. Crothers. Like Connie, Ms. Jones has thoroughly absorbed the tradition and makes of it something very personal and modern-free. It's a wonderful series of dual improvisations to be heard here. Connie is on a roll with all the considerable pianism she has to devote to the music. She encompasses the harmonic implications of both the music channeled and the immediacy of her freely inventive partner, melodically countering Ms. Jones' very creative line weavings with those of her own. They play their way in and out of the melodic-harmonic particulars of the standards with a thoughtful vibrancy, then soar in the freely devised sections.

Live at the Freight has it all. Jessica Jones at her impressive best, a post-Bird flying gracefully, skillfully, creatively. Connie Crothers taking the music apart and putting it back together in her very own way, confirming why she is so important to the scene.

This one takes flight and takes you far. You will not be disappointed.