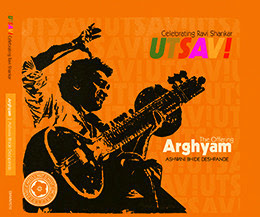 Continuing the UTSAV! series of music inspired by and in tribute to Ravi Shankar is this volume by singer Ashwini Bide Deshpande, an acclaimed member of the Jaipur-Atraulli Gharana and someone Maestro Shankar stood in relation to as Guru.

She performs a series of compositions-ragas, all of which were created by Ravi Shankar with the exception of one, which Ms. Deshpande created herself.

She has a marvelous voice, warm and expressive, and extremely dexterous as called for the the later sections of the ragas. She is ably accompanied by excellent practitioners on harmonium and tabla.

As a bonus the last track features Ravi Shankar himself, performing Raga Mishra Gara in a recording made some years ago and previously unreleased.

Ashwini Bhide Deshpande is a marvel. The disk will be pure delight to those who love the North Indian Hindustani classical music style.

Posted by Grego Applegate Edwards at 7:02 AM