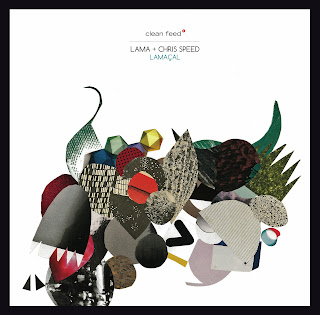 Not every musical collaboration is "made in heaven". Some have their moments but maybe aren't as productive as they might seem on paper. Others have that extra something, where all involved share the performative act as sympathetic equals, dedicated to a singular undertaking. I would definitely put the meeting of Chris Speed and Lama, on their recent live disk Lamacal (Clean Feed 275), in that second category.

The foursome hold forth at the 10th Edition of the Portalegre Jazz Festival in a full set of sonic adventures. Chris plays tenor and clarinet throughout, then it's Susana Santos Silva on trumpet and flugel, Goncalo Almeida on double bass, effects and loops, and Greg Smith on drums and electronics. The non-acoustic/effects elements have an integral, inclusive role to play at points in the program, coloring the ensemble sound, most obviously the bass. It's the acoustic playing (whether over, around or [mostly] by itself) in the end that brings it all together.

What's good about this encounter? Plenty. One thing is how well Susana and Chris work together as the front line soloists. Ms. Silva has good ideas and execution and Chris complements her well. Chris on clarinet is something to hear (and I'll admit I haven't paid enough attention to that side of his playing until now). Of course his tenor work has stamina and vision--and it combines effectively with Silva's trumpet, whether they are playing around with compositional elements or doing a dual-improvisational thing.

The composition/sound landscaping gives the music dramatic longevity. Your ears do not tire because there is pace-changing diversity in a freely-avant yet structured setting. Almeida writes four of the seven; the others contribute one apiece.

Almeida and Smith have very nice push and subtle interplay as needed. And Almeida often plays a pivotal role in the structure of the compositional framework through ostinatos and such. And he solos with intent and results, then gets some good wood on the ensemble passages consistently, too. Smith has creative force in his playing and does not resort to any of the free cliches you can sometimes hear overdone elsewhere.

The music can kick it up well to a more frenetic level when it is time. The feels and melodic modes are worthy of hearing and put all the improvising on a hear-it-over-again basis.

Very nice effort. These four got something going on that gig. You should find it very stimulating--like I did.

Posted by Grego Applegate Edwards at 7:31 AM