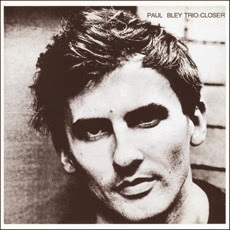 It is possible that pianist Paul Bley is not as recognized as an important figure in the development of free jazz now as he was years ago. I do not claim to have my finger on the pulse of consensus out there, partially because I don't really care what the world thinks and it does me no good to heed the "no, we don't recognize that" jazz police that claim to be the sole tastemakers. Why would I care?

In my own thinking Paul belongs to a small handful of piano innovators in "new thing" evolution. Of course the other would be Cecil Taylor. And of course there are others, but the influences of Taylor and Bley seem especially critical in what went after.

And of all the albums Paul has made, one of the most seminal surely is Closer (ESP 1021), a trio date from 1965 that has been nicely remastered on CD for ESP's 50th Anniversary series. The trio included the wondrous bass wielding of Steve Swallow. On drums was a young Barry Altschul, at the very start of his free drumming career and already an extraordinarily sensitive drummer for the trio context.

And on this album Paul was making a pretty clean break from bop roots--in just 27 short minutes covering some seven very excellent Carla Bley compositions, a number written by Ornette Coleman, one by Annette Peacock and one of his own.

These are classic head structures that allow Paul and the band to break free of changes and let themselves create free tonality and chromatic improvisations that of course owe much to Ornette's harmolodic approach yet have an unmistakable originality.

Keith Jarrett most certainly paid close attention to what was going on with Paul in this stage and built his early style around it. Then of course many others have followed in the path since.

But even if others had not been influenced in the years that followed, this album would still hold up as an avant classic. It is that--and anyone who hasn't heard it really should check it out.