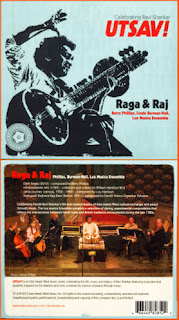 To honor and celebrate the life and music of Ravi Shankar, several new and highly interesting CDs have been produced, all under the general series title Utsav! Today a look at Raga & Raj (East Meets West Music 1011), a fascinating compellation of Western Classical-Indian Classical hybrid fusions, which of course Ravi Shankar himself did much to promote through his deservedly acclaimed recordings with Yehudi Menuhin, and with many of his film scores.

Today's compilation features the Lux Musica chamber ensemble with noted jazz musician Barry Phillips on cello and Linda Burman-Hall on harpsichord. The two co-direct the musical proceedings. It's a series of compositions from various periods that utilize ragas and classical Indian melodies in combination with Western classical elements. So we have the tabla (much of the time) in tandem with Euro-classical instruments and some really fascinating music.

It's a wonderful set of works that evoke the singular past of the Raj and the Euro-Indian cultural cross-fertilization that begun centuries ago and of course continues today. Each work is unique, excellently performed and beyond simple description. This is an East-Meets-West conflation fully in keeping with Pandit Shankar's lifelong preoccupation with such constructive amalgams, yet a fascinating CD in its own right.

You should hear this one, definitely!