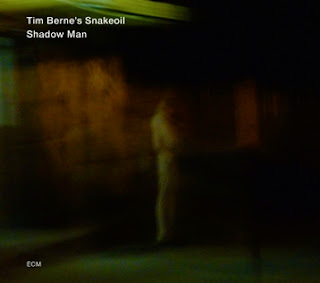 Tim Berne's Snakeoil band continues and perfects the long evolution and development of his music. The new album Shadow Man (ECM) makes it clear that he is still moving forward. Tim puts together the compositional-conceptual forms as you would expect, plays the alto and fronts a quartet that sounds much denser than a four-person outfit usually does.

That is in great part so because of how Tim and ensemble give you intensely worked out multiple sounding motival rubato often enough. There can be a pulse involved but it is plastic, malleable. In a way Tim Berne has been working out his own group logic from such roots as Trane's Sunship, and perhaps some of Braxton's classic pattern repetition pieces, and maybe Roscoe Mitchell of Nonaah, though the music sounds nothing like any of the three, exactly. There is almost a four-way, subtle-ized free-modern fanfare going on in the music, a way to approach the long-form of modern improvisational music by freeing the ensemble of the standard post-bop role-playing and having each player develop an integral part of the improvised-composed whole. Then there are endlessly counterpointed ensemble passages too, which ultimately work around variable patterns of intervals that extend outwards, potentially into infinity. Soloing on top of either form further extends the long-range, long-term possibilities of a work and yet gives you a feeling like you are still in the "head" mode. Or at least that is what I hear happening.

It helps to have a foursome with excellent improvisational instincts and imagination. Tim of course, Oscar Noriega on clarinet and bass clarinet, Matt Mitchell on piano and Ches Smith on drums, vibes and percussion. This is a group where each member is totally key to the compositional-concept sound, not spelling rhythm or harmonies as much as actively entering the four-way musical discourse.

And so that's what I am hearing. It is Tim Berne's own way and Snakeoil is perhaps the ideal player combination for hearing it. Shadow Man has a breathtaking beauty-in-hardness to it. It is one not-to-pass-by. Tim Berne is here in the present-future and we cannot ignore the music because it is fundamental to OUR present-future, I think. Mind you I am not saying that Maestro Berne is THE next thing. He is clearly A next thing, an important music-maker to coexist alongside some other key cats today. But you listen four or five times yourself. New music, jazz, call it what you want. But don't ignore it!

Posted by Grego Applegate Edwards at 7:07 AM